I am returning to this blog which I began last year and then neglected.  Now I am beginning again with a series of posts on how herbarium collections and the idea of the herbarium are used by artists in their work.  I am beginning with one of my favorite artists, Victoria Crowe, whom I discovered through her plant images but whom I’ve come to value for the broad spectrum of her art.  I am grateful to her for allowing me to reproduce several of her works here. 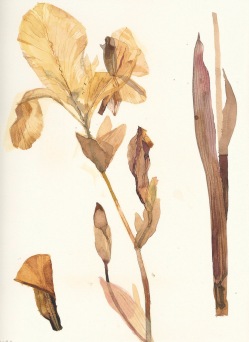 Victoria Crowe is a noted British artist who discovered the herbarium world over a decade ago. A faculty member at the Edinburgh College of Art, she is a versatile painter known for her portraits and also for her flower paintings. In fact, when Elizabeth Blackadder retired from ECA, Crowe took over her botanical art class. It was these two strains in her work that led to a commission to paint a portrait of David Ingram, then Master of St. Catharine’s College, Cambridge University. Since Ingram is a botanist, Crowe wanted to include evidence of his work in the painting’s background; this included enlarged microscopic images, a cross-section through a flower, and a herbarium specimen—a brownish pressed plant. The species was carefully chosen; it was Sibbaldia procumbens, a plant of the Scottish highlands named after Robert Sibbald, a founder of the Royal Botanic Garden Edinburgh (RBGE). To find a model for this plant, Crowe visited the Cambridge Herbarium and was so impressed by the specimens she saw that she later worked there and in the Cambridge Library as a visiting scholar. This led to an exhibit at St. Catharine’s that explored botanical illustration in early printed herbals. It also resulted in an exhibit called Plant Memory at the Royal Scottish Academy in 2007. In a lecture on the exhibit, Ingram notes that “Crowe found embodied in a herbarium sheet the same tension between timelessness and fragility which is the hallmark of her work as an artist” (Crowe & Ingram, 2007, p. 2). When she did research at the Cambridge Herbarium, she was particularly struck by “fragile Iris specimens, gradually fading as they went further back in time, and realized that she had found a new source of artistic inspiration” (p. 2).

Timelessness and fragility—this comes very close to the essence of an herbarium collection. If well cared for it can last indefinitely, but it’s easily gone in an instant in a flood or a fire or an insect infestation. And though timeless, specimens are not changeless. They have already been transformed—pressed flat and dry—in order to be timeless. Just as an artist may paint a flower removed from its habitat, so the botanist removes the plant in order to preserve the information it contains. Art and science use a specimen in very different ways, but as Crowe and Ingram explored their different worlds, they saw the connections between them, especially in the past when early modern botany developed primarily thanks to empirically accurate images in such herbals as those of Otto Brunfels and Leonhart Fuchs. They also came to appreciate that the two fields parted company as artists moved away from empiricism in their attempts to portray different modes of life and the multiplicity of levels that make up human experience. It is these levels that are represented in all of Crowe’s work which balances the objective and subjective, often by layerings of multimedia. Screen print, etching, and transfer printing are combined with drawings, watercolor and impressions of plants. There are also texts and illustrations from botanical books. Duncan Macmillan (2012) notes that in Plant Memory, “the fragility and beauty of the herbarium specimens is a constant theme, but it is layered and combined with other things in a way that extends its relevance beyond botany to life itself and the role of memory in our understanding.”

This is not a viewpoint often considered by the taxonomists and ecologists who work with specimens nor by the countless interns, volunteers, and herbarium staff workers who digitize specimens to make them available to a larger audience. However, I argue here that this larger audience includes artists, and in several subsequent posts, that those involved in broadening the appreciation of herbaria should definitely take note of this group. Yes, herbarium workers will often stop to appreciate the beauty of a particular specimen or the skillful way it was mounted, but artists like Crowe are dealing with specimens at a much deeper level, and exploring their metaphorical significance. Memory has become an important theme for Crowe since the death of her son from leukemia in 1994, and flowers are integral to many of the paintings she created in response to his death. But Macmillan (2012) notes further that for Crowe, “memory is seen not only as a faculty of the individual, but through art and books, the herbaria themselves, and all the other ways in which we accumulate knowledge and hand it on from generation to generation, as a marvelous form of collective memory” (p. 109). When working with specimens in order to publish on a taxon revision or to pin down changes in phenology over time, it isn’t easy to keep in mind these other layers that attach to the specimens: the lives of those who collected and annotated them, the intrinsic beauty of the material and its arrangement, and the ways in which the specimen may have moved about in trade among collectors or because of the disappearance of herbaria. This litany gives some appreciation for the many ways herbaria can attract artists and in turn, deepen the meaning of the collections.

A number of botanical institutions have collaborated with artists in recent years, resulting in an interesting body of work. Crowe is probably the most distinguished in this group, a mid-career artist who had already developed a reputation and audience. In other cases, the work is done by younger artists, sometimes while they are still students. In a conversation with Rachel Webster, curator of the Manchester Museum Herbarium, she mentioned that there are more individuals with arts backgrounds using the collection than scientists. This is in part because the museum is a unit within the University of Manchester and sits within the campus. It is also close to Manchester University which has programs in art and design. Both faculties have come to see the collection as a good source of ideas for their students. This bodes well for future art/herbarium collaborations.

2 thoughts on “Herbaria and Art: Victoria Crowe and Plant Memory”