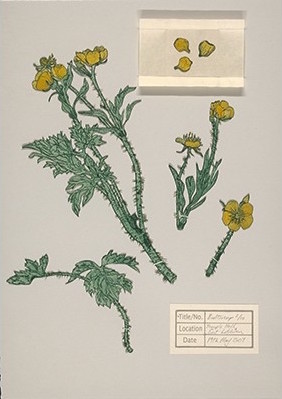 In artist/botanist projects such as those I’ve discussed in the last two posts, each participant is introduced to a new way of seeing, a new perspective by looking beyond the confines of their areas of expertise. Having artists work in herbaria is not just a way to produce art that will communicate the herbarium world to a larger audience, it is also a way for botanists to see their collections in a very different context. Recently, the conceptual artist Taryn Simon inquired if anyone at the New York Botanical Garden could help her with a project which was ultimately called Paperwork and the Will of Capital. She had photographs of the flower arrangements set on the tables where major international financial agreements were signed (Simon, 2016). She expected that the flowers used would reflect the flora of the country in which the signatories were gathering. Instead, she discovered that the arrangements lacked species diversity, with the same species being used no matter where the ceremonies occurred. Daniel Atha, a botanist and Conservation Program Manager at NYBG, was eager to assist Simon because he had grown up in a family of artists. In turn, he called on Sheranza Alli, the Senior Museum Preparator and Herbarium Aid, to walk Simon through the steps of pressing and mounting specimens.

The result was an exhibit held at the Gagosian Gallery in Chelsea, NY. Photos of the arrangements, along with descriptions of where they were used, were presented alongside mounted flower specimens of a rather non-scientific type since they were not labeled and several species were displayed on the same sheet, each being one of the species in the accompanying photograph. Atha found the experience fascinating since it gave him a window into the contemporary art world, and the realm of the flower trade as well. Simon ordered all the flowers used in the exhibit from commercial dealers in Holland—a commentary on cut flower economics. Interestingly, in their press release, Gagosian described the specimen sheets as “sculptures.” This emphasizes something that is often not evident when viewing digital images of herbarium sheets: there is dimensionality to pressed plants. They have lost some but not all of their texture and form.

This issue of dimensionality comes through in the work of several artists who have had contact with collections. The textile designer Imke van Boekhold used specimens from the Natural History Museum in Rotterdam as models for a series of machine embroidered herbarium specimens. In one series, she created “specimens” of Rotterdam plants, and in another, ones of plants that grow on the remote Scottish island of Foula, a place she had never visited. She employed specimens collected on Foula and now in the Rotterdam herbarium to make the pieces—a nice commentary on the way specimens move around and the international nature of herbaria. Van Boekhold’s work illustrates the way specimens can be rendered in a variety of different media. One book artist, Tracey Bush, has pasted cutouts of poppies and other common British flowers on sheets that are labeled with both the common and scientific names of the species. The cutouts are made from advertisements so they are colorful and incongruous, suggesting that nature is being commoditized, and that we are so accustomed to bright images that the faded flowers of a herbarium sheet would be disappointing. This is also a commentary on Mary Delany’s very accomplished cutouts of plants made in the 18th century and highly prized for their beauty and botanical accuracy.

Bush’s work appeared in a show on artist’s books and the natural world at the Yale Center for British Art (Fairman, 2014). Also in the show was a piece by Jane Hyslop who has done reseach at the herbarium at RBGE [see figure above]. Her process is particularly painstaking, and a metaphorical combination of botanical illustration and specimen preparation. She created a “paper herbarium” by collecting plants from her local area and making etchings of them, somewhat as a botanist collects specimens and flattens them on paper. Then she cut out the etchings and pasted them on herbarium sheets, with labels giving the names of the species and the collector, as well as the collection date and locale. This is reminiscent of the notebooks of Felix Platter, the early modern botanist who cut out the Hans Weiditz watercolors which were used to make the woodcuts in Otto Brunfels’ herbal. Hyslop’s work is also a commentary on the disappearance of so many plant species, with herbarium specimens being the only tangible record of their existence. In the future, all we can do is reproduce them in works of art.

One thought on “Herbaria and Art: Collaborations”