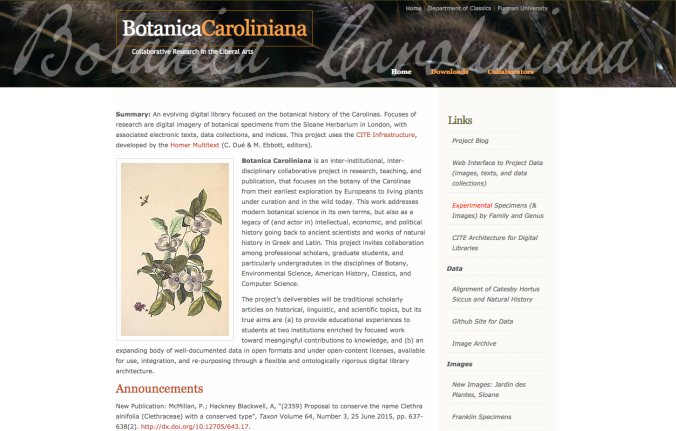 As promised in the previous post, here are several projects combining herbarium collections and history. The Bergerbibliothek in Bern, Switzerland has an impressive website for its collection of Felix Platter material. Platter (1536-1614) was a noted physician and botanist who had an extensive herbarium now available on this site. What is even more striking is the collection of illustrations he amassed, including some of the original watercolors done by Hans Weiditz for Otto Brunfels’s groundbreaking herbal of 1530. These drawings were painted on both sides of a page, and Platter wanted to file them according to species, which meant that he or one of his assistants cut out each drawing in an attempt to have good representations of both species that could be filed separately. These were then pasted to individual sheets of paper. Now all of this is available online, giving a good sense of Weiditz’s artistry, if in a somewhat odd format. This questionable treatment does indicate how important Platter considered illustrations in the study of plants at this time, and it’s this valuing that allowed these masterpieces to be preserved. In the many volumes of the Platter herbarium there are also woodcuts and other illustrations. Now all these are searchable, and the specimens and illustrations of a species can be seen at the same time. This was a massive effort and a beautiful result because the Bergerbibliothek’s Platter site also has information on the provenance of the collection and the restoration project to stabilize the volumes.

As you might suspect, I am partial to Renaissance collections and grateful to those European institutions such as the libraries in Erlangen and Bern that have made them freely available. At the Jagiellon Library in Krakow, the Libri Picturati, a collection of botanical illustrations related to Carolus Clusius, has also been published in book form (de Koning et al, 2008), but it’s not yet available electionically. As more of these treasures receive attention, it would be wonderful to have a portal that made them all searchable at the same time, so a user could see how a particular species is treated by a variety of different artists, along with related specimens (A portal like this exists for European cabinets of curiosities). In some cases, as with the Jamaican plants in the Hans Sloane Herbarium at the NHM, the illustrations made by Everhardus Kickius for Sloane’s volumes (1707, 1725) on Jamaica are very similar to the specimens. This is easy to see because the specimen and watercolor are set right next to each other on opposite pages of the bound volumes of his herbarium. The Sloane Herbarium site is searchable, if you know a genus or species you want to see. This type of portal is designed more for biologists than for historians and brings up the issue of how design can limit or discourage access to a site.

Another important project is Botanica Caroliniana, a collaboration between Furman and Clemson Universities. Several historical collections related to the Carolinas have been put online. The first was the Catesby collection of specimens in the Sloane Herbarium at the NHM in London. Each specimen is presented opposite the page in Catesby’s Natural History of the Carolinas that depicts the species, with the accompanying text also displayed. This is a great example of what digitization makes possible: the juxtaposition of images and text from a rare book with specimens from a priceless herbarium. History, botany, art and literature are all involved, and the project was done by institutions of the region of origin of many of the specimens, so it speaks to environmental conservation and respect for the nature of the area.

Another project from South Carolina called Plants and Planter deals with the work of the botanist Henry Ravenel (1814-1887). It presents Ravenel’s specimens and journals, along with journal transcripts. Several institutions— South Carolina University Library, A. C. Moore Herbarium, Clemson University, Converse College, and the University of North Carolina Wilson Library—contributed materials, bringing them together in a searchable format. Some of the specimens on this website were scanned as part of the Advancing Digitization of Biological Collections (ADBC) project. This is a massive NSF-funded effort to digitize biological specimens at non-federally sponsored institutions and suggests that these efforts have more than scientific value. Ravenel collected before, during, and after the Civil War, so historically his work is significant. He eventually focused on fungi, and particularly after the war he made large collections that he sold as a way to improve his economic condition. He is considered one of the most significant students of fungi in the 19th century (Haygood, 1987).

There are other collections that could benefit from this type of presentation. Asa Gray’s papers at Harvard have been digitized, and some of them transcribed. Many of the specimens he used in his work have also been digitized at Harvard. However, it would be a massive undertaking, involving very different databases, to create a portal where specimens could be called up with the corresponding text, even though the two collections are physically close together. It’s obvious from the examples of Sloane and Gray, that physical and electronic proximity are very different things. But that doesn’t mean that this is not an ideal to aim for. In the meantime, it’s a comfort to know that smaller projects, like those for Catesby and Ravenel exist.