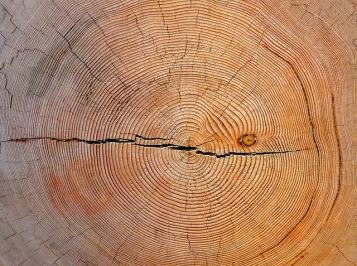 In discussing wood collections as I have in the last two posts (1, 2), it’s impossible not to touch upon the subject of tree rings. They are most apparent in cross sections through the trunk and are evidence of what was going on in the environment around the tree as the cells of these woody tissues were forming. Rings have long been used in dendrochronology: dating the age of trees and of wood specimens by counting the yearly rings. To do this effectively requires a great deal of patience and a large reference collection in order to come up with absolute dates. Such a collection exists at the Laboratory of Tree Ring Research (LTRR) at the University of Arizona. Founded in 1937, this facility was built on the work of a pioneer in the field, A.E. Douglass. The LTRR now houses 80,000 tree ring specimens, making it possible to date wood over a wide range of time frames. Though not listed in the Index Xylariorum, perhaps because of its narrow focus, it definitely counts as a wood collection in my book.

Tree ring research is about history. It’s about using tree growth as a way to count years, but it is also much more than that, because trees don’t grow the same type of ring every year. The amount of growth, wood density, and color are all affected by the conditions under which the development took place, as well as by the biology of the species. Tree rings can tell something about the weather conditions at a particular time, and weather measured over years reveals something about climate and thus climate change. This particular kind of wood collection has become more valuable as scientists scramble to figure out what is happening to climate now and what has happened in the past. A very old piece of wood or petrified wood millions of years old can’t be absolutely dated. However, if the species can be identified, and it’s related to a present-day tree, then measurement of these ancient rings may very well tell researchers something about the conditions affecting its growth. Needless to say, the LTRR is carrying out a good deal of this research, but it is being done in many other labs as well, not only by botanists but by geographers and climatologists. There is an active program at the University of Tennessee; it is run out of the geography program, and they have an interesting website if tree ring research is something you relish. In addition, the National Centers for Environmental Information tackle paleoclimatology from a number of angles including dendrochronology.

Before I leave the subject of tree rings, I want to introduce two artists’ projects dealing with the topic. One is John Stoney’s “A Dark Forest” (2013), a tongue-in-cheek report on his efforts to find a tree that was as exactly as old as himself. He was 47 at the time, and using a tool to extract tree cores, he found everything from teenagers to 300-years-olds, and finally discovered one that he claims revealed its date of germination to be October 16, 1965. Along the way, he relates the history left in the varying characteristics of the rings, telling of drought and also of good weather, with similar highs and lows in his own life. It’s an interesting approach to exploring a human’s relationship to nature.

More to my liking is a wonderful book called Woodcut by the late Bryan Nash Gill (2012). It’s a collection of, quite literally, wood prints. Gill would cut a slice through a tree trunk, sand it, apply ink, and make relief prints, that is, impressions of the wood’s raised grain. He began this project while he was building a studio on his family’s farmland in Connecticut. He felt a connection to the trees that were being used in construction, some felled on the property, and he wanted to document that link. His largest print is of an ash trunk about four feet in width; an old cedar telephone pole turned out to be over 200 years old. Admittedly, this is art and not science, but these works do reveal the wonder of a tree’s life and how much more it is than just a wood factory. Usually, a cross section is seen as a tool for determining age or a grain pattern that might look good as a piece of furniture, but here the patterns presented in black and white are meant to be appreciated in their own right.