Watercolor of G.S. Malcolm’s grave in an Adam White scrapbook in the collection of the Green Plant Herbarium at the Royal Ontario Museum, Toronto

Adam White (1817-1878) was a Scottish entomologist who never traveled outside his country, so why is he considered important to the Green Plant Herbarium (TRT) of the Royal Ontario Museum (ROM)?  The answer was revealed during my recent visit to the herbarium (see 1, 2).  From the age of 18, White was employed in the zoology department of the British Museum.  There he dealt with materials collected during British expeditions to all parts of the world.  For example, he identified and published on the spiders that Charles Darwin collected on The Beagle.  At times, he was given duplicate specimens from various expeditions.  He kept some of these materials, including plant specimens, in notebooks, and two of these ended up at the TRT, donated by relatives of White who lived in Toronto.  This is one of countless herbarium stories about how specimens can travel long distances over a long time before finding a permanent home.

Because these scrapbooks are so rich, it makes sense to treat them separately.  One was described by Nicholas Polunin (1936) shortly after it was donated to the TRT.  Its contents, available online, open with a series of 36 plants collected by Peter Sutherland during an 1850-1851 expedition to Baffin Bay in search of evidence for what happened to the last Franklin Arctic Expedition, which was last seen in Baffin Bay in July 1845.   Sir John Franklin’s wife pushed for searches to discover the fate of the party of over 100 men.   Sutherland sent a collection of 54 plants to William Jackson Hooker for identification, and the White specimens appear to be duplicates of some of these.  They have botanical importance because few collections have ever been made in this area.  Next are about a dozen plants from Sir John Richardson who led the expedition.  While Richardson named them, he didn’t give collection dates or locations as Sutherland did.  These are followed by 20 plants collected in southern Norway by L. Esbark.  The last 25 specimens date from the late 1840s and were gathered by Joseph Dalton Hooker and Thomas Thomson in India and the Himalayas.  These are significant because most were published by the pair.

Since this is a scrapbook, it’s not surprising that along with plants there are other items pasted on its pages including an autographed engraving of the Arctic explorer W.E. Parry and an original watercolor depicting the grave of G.S. Malcolm who was in the Franklin search party and died of frostbite (see photo above).  There is a handwritten note relating that “The plant which covered Malcolm’s grave was the Saxifraga oppositifolia,” so it’s appropriate that it should end up in a herbarium.  There are other such miscellanea, but it is the plants that make this scrapbook interesting and valuable, and explain its residence in TRT.

The second Adam White scrapbook has some empty pages so it’s described as unfinished, but it’s still a treasure trove.  It too has its own website, with information on White and on those who contributed the specimens, as well as maps of the locations where these were collected.  There are several distinct and unrelated areas represented: Europe, Palestine, and the sites visited by Joseph Dalton Hooker on the Ross Expedition to Antarctica (1839-1843).  The European material comes from British botanists: Joseph Woods, W.C. Hewitson, and Robert Brown.  The Palestine material was collected by the Scottish botanist Horatius Bonar.  Images and information on all the specimens, organized by collector and location, are available on the website.

Among the Hooker specimens is a new species, Lyallia kergulensis, (see photo below) that he collected on the subantarctic Kergulen Islands and named for his friend David Lyall who was surgeon on the HMS Terror during the Ross Expedition.  In later years, Lyall also served on ships exploring the Arctic and made valuable collections of plants at both poles.  It’s also interesting to note, as Deb Metsger pointed out, that the two ships on the Ross Expedition to Antarctica (1839-1843) were the HMS Erebus and the HMS Terror.   These ships were later refitted and carried the Franklin party into the Arctic, where they disappeared.  Remarkably, both ships have been found recently.  The Erebus in 2014 and the Terror 31 miles away in 2016.  The latter’s location was 57 miles from where it was reported abandoned in 1845.  So White’s notebook united these two ships in a remarkable way, through plant specimens collected at both ends of the world. 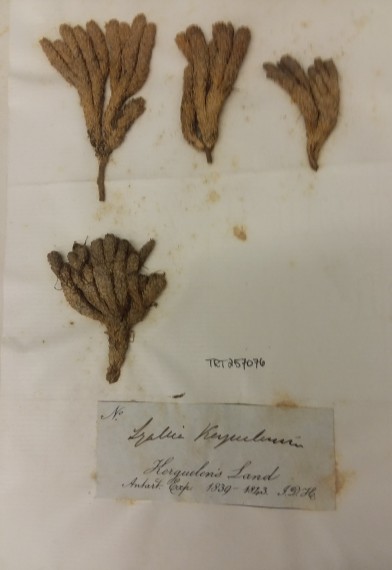 I should note in closing that there was a third Adam White scrapbook donated by his family.   It contained moss specimens and was taken apart so the specimens could be filed taxonomically in the general collection.   When the bryophyte collection was reorganized a few years ago, Deb Metsger undid this work and reunited the White mosses.  Because many of its pages were cut up to separate specimens, it would be difficult to reconstitute the scrapbook, but Metsger hopes to find a way to fittingly preserve the treasure.  This is the attitude of a truly dedicated curator, and Deb is definitely that.  She cares very thoughtfully for the collection and is generous to those like myself who want to learn more about it.

Note: Thanks to Deb Metsger for taking the time to show me these wonderful treasures of the TRT.  She made my visit memorable.