To me travel provides the opportunity to visit herbaria.  I walked past Edinburgh Castle and Holyrood Palace at the opposite ends of what’s called Edinburgh’s Royal Mile, and it was great to see their very different architectures, as well as the wonderful architecture in between, including the modern Scottish Parliament Building and many structures dating to the 17th and 18th centuries.  But it was the herbarium at the Royal Botanic Garden Edinburgh (RBGE) where I saw truly amazing sights.  I will go into this in more detail in subsequent posts, here I’m just going to hit the high points of what I saw at RBGE and several other herbaria I visited on my recent trip to Britain (see last post).  A few years ago, RBGE published a book called Botanical Treasures (Atkins et al., 2014) with photographs and descriptions of objects from its herbarium and library, so I had a guide to some of the collections.  Sally Rae, assistant herbarium curator, took out specimens prepared by Robert Kaye Greville, an expert in mosses, who sometimes painted watercolors of specimens on the sheets (see photo above).  In the library, Graham Hardy showed me a copy of Greville’s Flora Edinensis Cryptogamia with blank pages interleafed where Greville added notes and watercolors on new species.  This is just one example of the riches of these collections and how library and herbarium interrelate.  Others were shown me by Henry Noltie, a noted researcher in Indian botany and the history of its botanical illustrations (2002, 2016, 2017).

At the Royal Botanic Gardens, Kew, Mark Nesbitt, curator of the Economic Botany Collection, gave me a tour of its storage facility for over 100,000 specimens.  In 1847 Kew was the first to open an economic botany museum and while its museum building has now been converted into a restaurant (see photo below), with a few of the displays retained (see photo below), the collection is intact.  Nesbitt is working with colleagues at Kew and Royal Holloway to track the many items that Kew distributed to other institutions over the years in a project called the Mobile Museum. He and Carine Cornish (2016) have documented how, as interest in economic botany declined in the 1950s, specimens from such collections were disbursed to herbaria and botanical collections, while the artifacts made from plant material—everything from palm mats to barkcloth jackets—found their way into world culture or ethnographic collections.  As interest in both types of assemblages is now growing, Nesbitt has worked with a group of colleagues to create a guide on Curating Biocultural Collections: A Handbook (Salick, Konchar & Nesbitt, 2014). 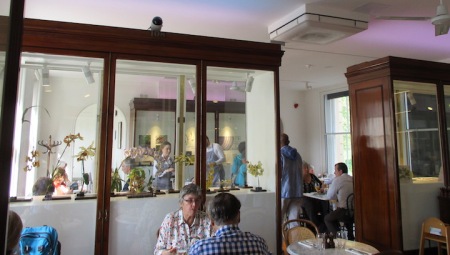 Display case with wax orchid models at The Botanical restaurant at the Royal Botanic Gardens, Kew.

I went to Oxford University Herbarium to see portions of the William Sherard (1659-1728) collection.  In my exploration of pre-Linnaean botany, his name kept coming up in a number of contexts:  he studied with Joseph Pitton de Tournefort in Paris and Paul Hermann in Leiden, helped finance Mark Catesby’s trip to the Carolinas, collaborated with John Ray and other leading botanists of his day, served as advisor to the noted horticulturalist Mary Somerset, Duchess of Beaufort, and did extensive research on a revision of Caspar Bauhin’s Pinax Theatri Botanici.  Oxford has one of the great historical herbarium collections as well as an extensive modern collection.  The Druce Curator of the herbarium, Stephen Harris, has written extensively on what it contains (2007, 2015, 2018) and showed me some of the large of boxes of notes for the Pinax revision that Sherard and his later collaborators, Johann Jacob Dillenius and Humphry Sipthorp kept, though it was never published.  Also, Sherard had obtained a portion of Paul Hermann’s plant collection and manuscripts, and these included the class lists from Hermann’s courses at Leiden (see photo below).  Leiden was such an important center of medical education at the time, in large part because it was one of the few institutions open to religious dissenters who flocked there from the British Isles, France, and Germany (Stearn, 1962).  These lists bear this out.

Pages from one of William Sherard’s notebooks for his unfinished revision of Caspar Bauhin’s Pinax Theatri Botanici, University of Oxford Herbarium.

I switched gears and saw a much more recent collection in the Royal Horticultural Society RHS herbarium at Wisley that has a different character than that of most herbaria.  There is an obvious emphasis on cultivated plants; even the way the sheets are prepared is somewhat different.  As the Keeper of the Herbarium Yvette Harvey explained, the collection was begun in the early 20th century with student collections.  Each horticultural student was expected to prepare 200 specimens during their course of study.  This practice remained until the 1980s, when the number was down to 10 per student.  Now the collection is continually enlarged as specimens are prepared from plants growing in RHS gardens often as a result of research projects.  For many years it was the practice to paint watercolors of prize-winning plants on the specimen sheets in order to provide a color record.  Now instead, labels record colors matched with the RHS numbered color cards to provide a consistent system for indicating color.  Also the sheets display dissected flower parts as well as intact blooms.

Page from Volume 131 of the Sloane Herbarium with specimens from Mary Somerset, Duchess of Beaufort at the Natural History Museum, London.

The last herbarium I visited was in a sense the daddy of them all, that of Hans Sloane at the Natural History Museum, London.  There are 265 volumes housed in a purpose-built facility.  All I can manage here is a brief introduction to what I saw and learned there.  I was guided by Fred Rumsey, senior curator in charge of the historical plant collections.  Sloane himself gathered many of the plants in the first seven volumes, which include those from his stay in Jamaica.  However, he acquired many more botanical specimens through purchase and trade, just as he acquired coins, books, works of art, ethnographic materials, etc., etc.  Among these were specimens prepared for Mary Somerset.  In one of her volumes, it says on the first page that these specimens were prepared “by order of Mary, Duchess of Beaufort.”  It seems that she demanded care in the process (see photo above).  The pages are large and each specimen is folded in its own piece of paper which is then attached, along with a number of others, to a page.  Unfortunately, there was so much to see, I didn’t get past the first volume of her plants, but it was enough to make me want another trip to London ASAP.  I also learned a great deal from my conversation with Rumsey and with Mark Carine, principle curator for plants.

Harris, S. A. (2018). Seventeenth-century plant lists and herbarium collections: A case study from the Oxford Physic Garden. Journal of the History of Collections, 30(1), 1–14.

Note: I would like to thank Henry Noltie, Sally Rae, and Graham Hardy at the RBGE, Mark Nesbitt at Kew, Stephen Harris at Oxford, Yvette Harvey at Wisley, and Fred Rumsey and Mark Carine at NHM for their warm welcome and generous help.