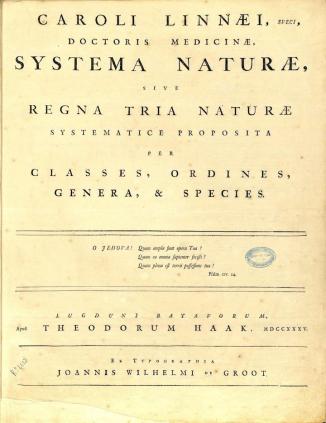 There is a great deal of talk about the European Union these days, and the advantages of open travel among nations.  Freedom of movement is a wonderful concept in any age, and it’s one experienced by Carl Linnaeus (1707-1778) when he was in his late 20s.  Having completed his education in Uppsala, Sweden and having become engaged to a woman whom he very much desired, he set out for three years of study and travel.  This wasn’t entirely his own idea.  His future father-in-law was not thrilled with his daughter’s beloved, a physician with few financial resources, so he would only bless the match by having Carl agree to a three-year hiatus.  Linnaeus might not have been a man of means, but he was a man who had already learned a great deal about botany and had developed original ideas about how plant diversity should be organized.  He also had some experience of travel having spent a few months exploring Lapland, the northern reaches of Scandinavia.  So in 1735 he took his manuscripts, packed his bags, and headed to the Netherlands, traveling through Germany on the way.  His experiences in Holland and elsewhere in Europe did a great deal to form his ideas and shape his career.  This series of posts will look at some of those influences (Blunt, 1971).

It seems that Linnaeus did not make a good first impression on many people.  There are a number of stories about men who were put off by his self-possessed manner, and then, as they realized what a good mind lurked behind the bravado, became good friends with him.  This was the case with Johannes Burman, a professor of botany and director of the Amsterdam botanic garden.  Burman, who was the same age as Linnaeus, had been at the garden for several years working on the Flora of Ceylon, using primarily the herbarium of Paul Hermann, who had collected there in the 1670s.  After this brief meeting where Burman was unimpressed by Linnaeus, it would probably have been difficult for either of them to predict that they would be lifelong friends.  At this time Linnaeus also visited Albertus Seba who had amassed a large cabinet of curiosities including materials he collected on trips to the East and West Indies.  During these years the Netherlands was an important naval power with far-flung mercantile interests, so along with trade goods—like spices and silks, exotic plants, animals, and artifacts also poured into Dutch ports.  Even though Seba had sold his original massive collection, he was able to build another and showed some of it to Linnaeus on two visits to his home.  He later asked Linnaeus to assist him in preparing a book he was writing on his holdings, but by then the Swede had made other connections (Rutgers, 2008).

Linnaeus next spent two weeks in Harderwijk, the site of a university where for a week’s residency he qualified as a doctor, submitting a thesis he had written in Sweden.  Then he went to Leiden and showed his manuscript of Systema Naturae to the Dutch botanist Jan Frederik Gronovius, who was so impressed with the work that he arranged for its immediate publication as a thin volume of 14 pages that set out the rudiments of Linnaeus’s taxonomic system.  Gronovius also gave him a letter of introduction to Herman Boerhaave, who had retired as head of the Leiden Botanic Garden.  As with Burman, their relation did not begin smoothly, but eventually Boerhaave appreciated Linnaeus’s intelligence and energy.  However, none of these meetings landed him a position where he could earn enough money to allow him to remain in the Netherlands.  He told them that he would have to return home.  That’s when Boerhaave offered to fund a trip to Cape Town, South Africa which was then under Dutch control and was proving to be a botanically rich area.  Linnaeus, however, after his Lapland expedition, did not much relish a long journey with many probable hardships; Sweden was a safer and easier option.

There are more twists to this story.  On his way home, Linnaeus stopped in Amsterdam and again visited Burman, this time with a letter of introduction from Boerhaave.  Burman paid more attention to his visitor, especially after Linnaeus was able to identify a rare plant Burman showed him.  The latter offered to pay Linnaeus for helping to prepare the Flora of Ceylon, and also convinced him that he should definitely call on George Clifford, a wealthy merchant and horticulturalist who lived near Haarlem.  Clifford and Linnaeus got on well because Linnaeus identified many of his hosts’ Indian plants and was sorely tempted by Clifford’s offer to live and work on his estate, with access to his garden and herbarium.  But Linnaeus was committed to Burman.  In the end, Burman and Linnaeus visited Clifford, and Burman agreed to free Linnaeus if Clifford would give him a very desirable book displayed in his library: the second volume of Hans Sloane’s Natural History of Jamaica.  Clifford and Linnaeus were both very fortunate, with the gardener/financier getting an expert to bring order to his collection of specimens, properly name his plants—those in the herbarium and those in the garden—and help in producing a catalogue to make public his botanical treasures.  Linnaeus, on the other hand, was freed of economic worries, had a very comfortable place to live, and great resources to work with, including a first-class library.  What happens then will be the subject of a later post.