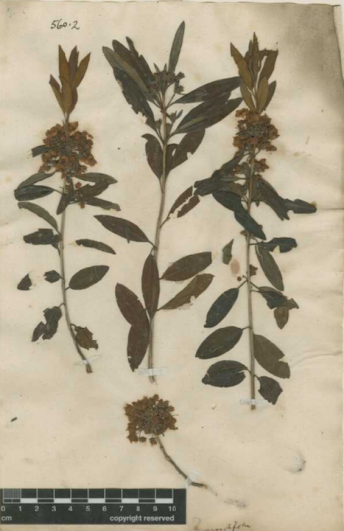 Kalmia angustifolia (LINN 560.2) from the herbarium of the Linnean Society, London

In the last series of posts (1,2,3,4), I discussed Carl Linnaeus’s time in the Netherlands where he was able to broaden his knowledge of plants and solidify his ideas on taxonomy.  When he returned to Sweden, he stayed put for the rest of his life, never leaving his native land again.  However while in Holland, England, and France, his exposure to plant collections from all over the world—living and preserved—made him realize that what was available in Sweden was indeed limited.  He tackled this problem in two ways.  First by maintaining a large correspondence with a broad range of botanists and collectors throughout the world, and secondly helping to engineer collecting trips by some of his students and proteges.  He himself called them “apostles,” but in most cases they were less involved in proselytizing his taxonomic system and more committed to collecting new species to augment his massive work, Species Plantarum, his attempt to name and describe all known plants.

One of the first travelers for Linnaeus was Pehr Kalm (1716-1779), who studied at the University of Uppsala in the early days of Linnaeus’s professorship there.  They were both interested in useful plants that would strengthen Swedish agriculture, and Kalm studied economics with an eye toward this issue.  Canada seemed a particularly attractive area in which to search for new species, because it was at a similar latitude to Sweden.  In addition, Linnaeus was interested in obtaining more plants and information from two men in the British colonies, with whom he had already been in communication, John Bartram and Cadwallader Colden.  He and other professors managed to finance Kalm’s trip.  While spending several months in London waiting for transport, he visited Peter Collinson, a merchant and botanical enthusiast who had met Linnaeus several years earlier during the latter’s London visit (Blunt, 1971).  Kalm also went to the farm of another gentleman botanist, William Ellis, author of The Practical Farmer (1732). They discussed how weeds such as bracken could be useful within the economics of farming.  No trip to London for a botanist would be complete without a visit to Chelsea Physic Garden, and in his journals Kalm also noted plants in the fields and meadows he encountered on his walks.

Kalm finally reached Philadelphia in September 1748 with a letter of introduction from Linnaeus to Benjamin Franklin, who in turn connected him with John Bartram, a Philadelphia farmer and nurseryman.  Bartram had been sending seeds, specimens, and plants for several years to Peter Collinson from whom Linnaeus had received some Bartram material.  But of course Linnaeus wanted more, and Kalm was able to dispatch specimens and seeds.  He stayed with Bartram for a couple of days, examining his living collection and herbarium, and remained in the Philadelphia area until the following spring.  Most of his time was spent in and around a Swedish colony in Racoon, New Jersey.  The Swedish government had established it in the 1630s, and though it was taken over by the British after 20 years, residents in the area maintained Swedish traditions, yet today the town no longer exists.

In spring 1749, Kalm explored further north, visiting Cadwallader Colden in his home north of New York City.  Colden was interested in botany, had corresponded with Linnaeus, and welcomed Kalm’s visit.  While there, Kalm also met Colden’s daughter Jane, another plant enthusiast.  Robbins (1969) speculates that it might have been Kalm who encouraged her to begin work on her flora of the region, which she eventually produced with 300 of her own drawings.  From there, Kalm ventured farther north eventually reaching Montreal and then went on to Quebec.  In November he returned to Philadelphia by way of Albany and Saratoga.  On this trip he gathered watermelon, walnut, pumpkin, cotton, and early-ripening maize seeds which could possibly grow in Sweden (Juel & Harshberger, 1929).  Because he was thinking in terms of agriculture he was also interested in meteorology, kept weather records on his trip, and asked Bartram to also take readings in Philadelphia.

During the winter of 1749-50, Kalm married Anna Sadin, a Philadelphia widow.  In the spring he set out again traveling through western Pennsylvania and north to Niagara Falls, providing the first detailed account of the area and visiting the Iroquois who lived there.  This meant more specimen and seed collecting, and he packed up his materials back in Philadelphia in fall 1750.  He and his wife sailed to England in February, 1751 and arrived in Sweden in May.  He quickly distributed seeds for cultivation, and of course, visited Linnaeus who was thrilled with Kalm’s specimens.  In his 1753 Species Plantarum, Linnaeus describes 700 North American species, including 60 new ones that were collected by Kalm.  These included a species of Kalmia, a beautiful Ericaceae that its namesake had found in New Jersey.

Kalm appeared to have made three collections of North American plants, one for Linnaeus which is now part of the collection at the Linnean Society, London, one for himself that was destroyed in a fire, and one given to Queen Lovisa Ulrika of Sweden for her support of his travels.  The latter specimens are now in the herbarium of the Museum of Evolution at the University of Uppsala (Lundqvist & Moberg, 1993).  Kalm spent the rest of his life teaching in Åbo, Finland.  In 1752 he published a journal of his travels which was translated into English, and also wrote several articles on agriculture for the Swedish Academy.  Unfortunately, none of the plants he grew from North American seeds were ever used in Swedish farming, and even the mulberry trees he tended as the first step in developing a Swedish silk industry eventually died.  His most lasting fame is in Kalmia and that is wonderful in itself.