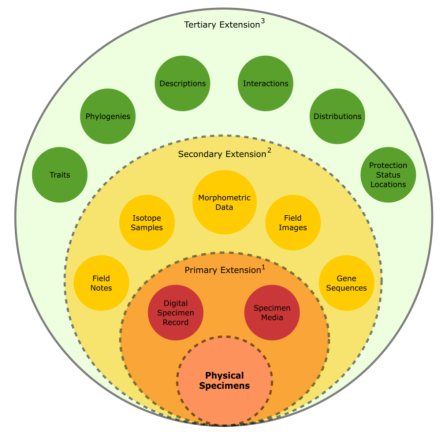 This post continues my report on the Digital Data Biodiversity Research Conference held at Yale University in June (see 1,2).  Digitizing the nation’s millions of natural history specimens is a massive undertaking.  iDigBio is the National Resource for Advancing Digitization of Biodiversity Collections (ADBC) funded by the National Science Foundation.  As the iDigBio website notes:  “Through ADBC, data and images for millions of biological specimens are being made available in electronic format for the research community, government agencies, students, educators, and the general public.”  Under this umbrella there have been a number of other projects including the TCNs or Thematic Collection Networks, through which particular types of collections were digitized with a focus on research questions that could be answered by the digitized data.  For example, there was one on insect herbivores, their parasitoids, and their host plants.

Another related project just being completed is the Biodiversity Collections Network (BCoN) “to support the development of a new, sustainable community of practice that will ensure that all U.S. biodiversity collections are digitally available for research, education, informed decision-making, and other scholarly and creative activities.”  This spring, BCoN released a report along with an informative summary.  The report develops the concept of yet another acronym, the ESN or Extended Specimen Network.  Now that information on a substantial number of natural history specimens has been digitized, the biodiversity science community is looking at ways to maximize use of this data, as well as opening it to new user communities.

The ESN is an exciting idea with specimens as the focus.  There are three layers of extensions out from the specimen (figure above).  First, the digital specimen record and an accompanying specimen image, or in some cases, a 3-D image file.  Second would be links to field notes and images, gene sequences, morphometrics, and isotope data.  The third includes phylogenies, species descriptions, ecological interactions, distribution maps, and protection status locations.  The report envisions that a user could enter the name of a species into a portal and from that one portal be able to access all these types of information for that species.  This would be a dream come true for biologists and might be a way to counteract the increasing specialization that has so changed the discipline over the past 200 years:  geneticists being able to easily call up information on the source species for a gene sequence and ecologists finding phylogenies for related species in an ecosystem.

Right now the ESN is more a concept than a reality.  Yes, at least some of the circles in this diagram are connected to each other for at least some species or for some geographic areas.  As I discussed in an earlier post, projects such as NEON and the Map of Life (MOL) are moving in the direction of integrating at least some of these pieces, but also as mentioned in that post, the problems of integration are massive.  It is as if iDigBio and other projects have amassed the building blocks for an intricate structure, most of which remains unbuilt, with even the plans in a rudimentary stage, and with developers trying to devise tools that will allow the building to continue.  Still, I find the ESN an exciting idea and can’t wait to see it evolve.  In the two years since the first Digital Data conference, projects such as MOL have made amazing strides, and so the next conference scheduled for Indiana University in 2020 will surely show significant progress on the ESN.

At the end of two days of presentations, there was a reception and poster session in the great hall of Yale’s Peabody Museum of Natural History.  This venue is noteworthy because of The Age of Reptiles, a massive mural depicting the history of dinosaurs on earth (Volpe, 2007).  It was created by Rudolph Zallinger in the 1940s and covers one long wall of the main gallery.  My poster stood under it and presented the argument that the ESN should be extended even further to include more historical material, and that biodiversity digitization projects should be linked to such large-scale digital humanities projects as the Darwin Correspondence Project and the website for the Dumbarton Oaks exhibit on the Botany of Empire in the Long Eighteenth Century.  In fact, JSTOR, the digital library database, and Dumbarton Oaks Research Library hosted a workshop in late 2017 in which they brought together historians of science, librarians, and technical experts to brainstorm and come up with ideas for future work in connecting biodiversity studies and the humanities.  There they developed ideas for linking different resources that are reminiscent of the ESN, including one where the focus would be on taxa.  Other possible points of entry could be through a geographic area, an expedition, and a collector or taxonomist.  There is an interesting video on the workshop that gives a good recap of its work.

My dream is that those involved in the ESN would meet with a group similar to the one convened at Dumbarton Oakes Library, and that they would explore where their various inquiries intersect.  A couple of years ago, E.O. Wilson (2017) published The Origins of Creativity, in which he argues that the sciences and humanities are much more intertwined than is usually assumed.  It would be a fitting tribute to the person who made the word biodiversity so central in present-day biology, to work toward interconnectivity between these two great accomplishments of the human species.