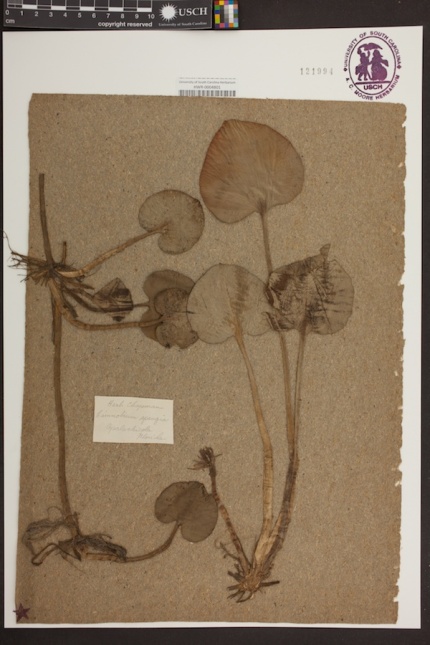 Specimen of Limnobium spongia from the Ravenel Herbarium at the A.C. Moore Herbarium, University of South Carolina, Columbia

Henry Ravenel was born in 1814 in an area outside Charleston that had been settled by French Huguenots in the 17th century.  They had fled religious persecutions by Catholics in France.  Many had first gone to Protestant England and then sought greater freedom and economic advantage in the British Colonies.  The Ravenels were plantation owners and had the money to send their son to a nearby academy and then to South Carolina College, now the University of South Carolina, Columbia, where he received his degree and where his herbarium resides.  While he was always interested in plants and went botanizing with those similarly inclined on nearby plantations, he did not go into medicine, as did others of that time with a botanical bent.  Instead he took up plantation life, inheriting land from his father.

Ravenel also pursued his study of botany, collecting specimens, seeking information from such experts as Asa Gray, Edward Tuckerman, and George Engelmann, and eventually becoming particularly interested in cryptogams.  When William Henry Harvey, the British botanist, was in Charleston on a lecture tour in 1849, he met Ravenel and was impressed by his knowledge.  Writing to William Jackson Hooker afterwards, Harvey bemoaned the fact that Ravenel was moving away from studying vascular plants and focusing on fungi.  Ravenel and Moses Ashley Curtis, a North Carolina clergyman/botanist decided to collect specimens for a fungal exsiccati.  Curtis eventually bowed out of the project, but continued to provide assistance, and Ravenel eventually published five volumes of Fungi Caroliniani Exsiccati between 1852 and 1860.  He also contributed to Fungi Americani Exsiccati (1872-1880) along with the British mycologist M. C. Cooke.

In 1853, Ravenel made a major change, selling his plantation and moving his family to a farm in Aiken, South Carolina, just east of the border with Georgia, near Augusta (Haywood, 1987).  He hoped the change to a drier and somewhat cooler area would improve his failing health.  Perhaps he also hoped that the land would be healthier too, because as early as 1843 he had banded together with other low country farmers to form an agricultural society to investigate ways of improving the diminishing fertility of their plantations.  His new property, Hampton Hill, provided him with a good income from the peach trees and grape vines he planted that were tended by about 80 slaves.  Then the Civil War changed everything.

One reason there is so much known about Ravenel’s life is that, besides the evidence of his broad correspondence with John Torrey, Asa Gray, and others, he kept a diary from 1859 until his death in 1887.  An edited version was published by Arney Childs (1947), a history professor at the University of South Carolina.  It is a fascinating book for someone like myself who is trying to learn Southern and botanical history at the same time.  Ravenel began with several entries on family and visiting relatives for Christmas, and on December 31, 1859 he decided “to record a few words upon political affairs. . . .  The future is now wrapped in uncertainty” (p. 4).

After war was declared Ravenel put nearly all his money into Confederate war bonds, something that was common among Southerners with means.  They saw it as a way to ensure the victory of their cause.  Since the bonds proved worthless, the ultimate outcome for Ravenel and many others was no financial reserve to fall back on after the war.  Fruits like peaches and grapes became luxury items in the South and were difficult to ship to Northern markets.  Ravenel sought several times to sell his land, but repeatedly turned down offers that were far below what the land had been worth before the war.  Eventually he did sell it for less than half what he had been offered right after the war.

He turned to botany as a way to earn some money, arranging to collect for others and also to write for agricultural and botanical publications.  He sold his botany books, many of them precious like 12 volumes of de Candolles’s Prodromus that netted $40.  He also eventually sold his microscope and the remaining issues of his exsiccati that he had.  He was pleased that his northern correspondents got in touch as soon as communication became possible, and he asked Gray for advice on starting a nursery.  When he put the same question to Philadelphia nurseryman Thomas Meehan, he received seeds and cuttings as a gift, and later a $50 “loan” that Meehan made clear didn’t have to repaid.  Ravenel’s friend from his youth, Dr. Francis Peyre Porcher, who is the subject of the next post, tried to find employment for him in Charleston but there just wasn’t anything to be had.  This is when Ravenel wrote in his diary that he regretted not having had enough resolve to go into medicine.

Through all this he continued to collect, but after his death his widow had a hard time selling his herbarium for what she considered its worth.  She ended up splitting it, with the cryptogams going to the British Museum (now the Natural History Museum, London).  A Ravenel relative bought the vascular plant collection and gave it to Converse College in Spartanburg, SC.  Eventually, the college transferred it on permanent loan to the A.C. Moore Herbarium at the University of South Carolina, Columbia, where it has been carefully curated and digitized.  The herbarium also collaborated with other university departments in the digital humanities project, Henry Ravenel: Plants and Planter, producing a website where Ravenel’s correspondence, journals, and specimens are all available and searchable.

Note:  I want to thank John Nelson and Herrick Brown of the A.C. Moore Herbarium at the University of South Carolina, Columbia for introducing me to the world of Henry Ravenel, teaching me so much about him, and helping me to decipher his handwriting.