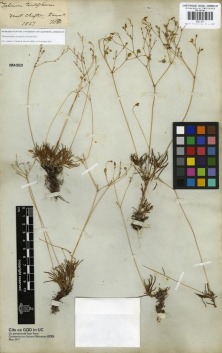 In this series of posts (1,2) focusing on particular specimens and collections of specimens, it’s impossible to neglect the past.  At least for me, some of the most fascinating specimens are those with long histories, in terms of age, the many hands they’ve passed through, and the vagaries they’ve suffered.  One of my favorite herbarium acronyms is GOD taken from the location of the collection created at the Charterhouse School in Godalming, England.  Founded in 1611, it is an elite high school that in the 19th century created a museum for its natural history and other collections.  The herbarium contains over 8,000 specimens, including many bound volumes with both specimens and illustrations.  When the museum was closed, the herbarium eventually found a home in 2011 at the University and Jepson Herbaria at the University of California, Berkeley.  How did it end up there?  An alumnus of the school, Andrew Doran, is a curator at the herbarium and saw GOD as a valuable historical collection.  The specimens date from the late 18th and 19th centuries, most from dozens of naturalists in Great Britain.

When I visited the Jepson, Doran showed me Rev. Tullie Cornthwaite’s collection, in part to call attention to the clergyman’s lyrical name.  These specimens are in bound volumes, including one with specimens collected on the Livingstone Expedition to the Zambezi River.  There are others dating from the 1790s that Cornthwaite acquired on a trip to Switzerland.  But the specimen that caught my eye was one where I recognized the handwriting and initials.  It was a Phemeranthus teretifolius collected in 1827 in West Chester, Pennsylvania with the initials, WD, for the local botanist, William Darlington, who himself had an impressive collection.  He corresponded with botanists in Britain and the Continent, though there is no record of any correspondence with Cornthwaite.  It may be that they had a mutual contact [see above].

Another collection, also in the San Francisco area, is the 12-volume bound herbarium of Lord Robert Petre at the Sutro Library.  Petre, an 18th-century horticulturalist, received specimens, seeds, and cuttings from another Pennsylvania botanist, John Bartram.  Their go-between was Peter Collinson who did so much to introduce North American plants to England.  Some of the Bartram material has his original notes written on slips of brown paper (Schuyler & Newbold, 1987).  These and many collectors’ specimens were bound into volume by Petre, a close friend of Collinson’s.  They remained in the Petre family until the 19th century when they sold his library to Adolf Sutro, the former Mayor of San Francisco, who bought book collections in Europe for a city library.  Like the Darlington specimen, Bartram’s traveled across the Atlantic and back before landing on the other side of North America.  In both cases, the specimens are definitely well treated [see below]. 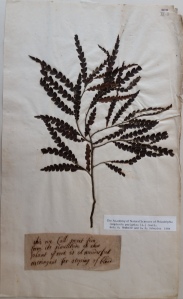 Anyone who deals with herbaria has similar, and probably, more spectacular stories of specimens moving from place to place, but it’s important to make non-botanists aware of these journeys.  Many people are surprised by how cosmopolitan even a smaller herbarium can be, though the majority of specimens may be relatively local.  In the A.C. Moore Herbarium at the University of South Carolina, Columbia, which I am proud to call my herbarium home, there is a specimen from Japan.  That’s no so odd; John Nelson, who for many years served as curator, fostered exchanges with herbaria in Europe, Asia, and throughout the United States.  But this specimen was sent by Asa Gray to the 19th-century South Carolina botanist, Henry Ravenel, whose collection is at A.C. Moore.

Ravenel corresponded with Gray, particularly after the Civil War when he was seeking advice on how he could make a living from botany.  Gray sent him a tiny piece of a Japanese fern.  What makes this notable is that Gray had received Japanese plant material from a friend of his with botanical interests who went on the US diplomatic mission that opened Japan to US trade.  Obviously Japanese specimens were at a premium at the time.  After studying these and other Japanese plants, Gray posited that the plants in these two areas had a common ancestry, but due to fluctuating climates, which remained most similar in eastern North America and Japan, the species were better able to survive in these regions (Dupree, 1959).  Charles Darwin, a friend of Gray’s, used this as evidence for his theory of evolution and a small piece of the story is sitting in Columbia, South Carolina.

I’ll end with a couple of even older examples of plant travels.  The Naturalis Biodiversity Center in Leiden, the Netherlands holds a bound herbarium dating from 1540 called the En Tibi that was probably created in Bologna, Italy.  Researchers in Leiden are working on genetic analyses of tomato specimens in the volume that may be the oldest preserved material of this species.  Others have identified four of the oldest tobacco specimens known, three in Ulisse Aldrovandi’s herbarium at the University of Bologna and one in the Erbario Estense in the Modena State Library (Vicentini et al., 2020).  These collections have been sitting in their respective locations for centuries with little attention paid to them until recently.  It is ironic that they are now the focus of several forms of cutting edge technology, from being imaged digitally to being analyzed chemically.  It’s not news that specimens tell stories, but it is news that such old volumes can tell such new stories.

The wonderful thing is that a number of significant herbaria created over the centuries still exist.  Some are in natural history collections, but some are secreted in libraries where they are less likely to receive scientific attention.  Digitization is one way these treasures are becoming more widely known, and thank goodness libraries are so adept at conserving and scanning fragile material.