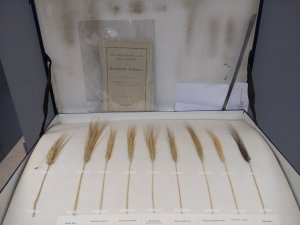 In this series of posts (1,2,3), I’ve been exploring herbarium specimens in a relatively fine-grained way, at the level of the individual specimen or a single person’s collection.  I want to end by giving a few examples of how useful one specimen can be.  The most obvious case is a holotype, the specimen used in the description of a species that is designated as having this role, perhaps along with others that also were involved, called isotypes.  Today, holotypes are named in the publication of the species, but this wasn’t so in the past, and the laborious process of designating holotypes, or in some cases lectotypes (when the original author did not designate a type), or other type categories continues.  In some cases, types are rediscovered.  Alex George (2018) reports on the type specimen of the Australian species, Donia formosa, the Sturt pea, described by George Don, a British botanist.  The specimen was thought to be in the herbarium of the Natural History Museum, London, but a search proved unproductive, so it was assumed to have been lost.  Now a specimen found in the herbarium of the Geneva Botanic Gardens, with an annotation by Don, has been officially designated by Alex George as the holotype.  He also clarifies that the plant was collected by Allan Cunningham on Malus Island in the Straight of Dampier off the coast of West Australia.  So this one specimen has done much to illuminate both the history and taxonomy of the Sturt pea.

Another way specimens are used in taxonomy is becoming more common as DNA sequencing technology improves.  Herbarium specimens are being mined for information on the origin and spread of cultivated species.  A specimen of sweet potato, Ipomoea batata, collected by Joseph Banks and Daniel Solander in the Society Islands in 1769 was used in a study on how the plant spread through the Pacific Islands from its origin in South America.  Obviously this wasn’t the only specimen tested, but it provided key information.  As smaller samples are required for testing and the techniques become increasingly sensitive, such work will become more common.  Of course, it depends on curators allowing removal of small samples, and this requires a serious decision, balancing present and future research needs.

Sometimes specimens are useful in telling stories to entice interest in a plant collection.  Allan Elliott, a Sibbald Fellow at the Royal Botanic Garden, Edinburgh, wrote a post about an “unassuming section of trunk sitting on a desk in the herbarium office after being “discovered” in the back of a carpological cupboard.  It arrived in our collection in February 1940 and is possibly from a plant of Rhododendron arboreum grown from the very first introduction of this species in 1797.”  Elliott goes on to describe this provenance by citing a note attached to the wood, written by William Evans who worked in the herbarium from 1919 to 1944.  Evans notes that the piece was delivered to the herbarium after the tree came down by the weight of snow.  It grew at Kirkdale house, which was owned by a family whose ancestor had served in the army in India and had likely obtained the seed from Capt. Hardwicke.  He also supplied seeds to James Edward Smith who described the species.

In an later Tweet, Elliott, still on the rhododendron hunt, includes pictures of a specimen of Rhododendron disterigmoides ssp. astromontium that is “an overlooked type and the only representative of this subspecies at RBGE.”  He particularly likes the specimen because it includes a map and as well as SEM images in an attached packet.  The scanning electron microscope is another technology that can be used in studying preserved plant material.  Elliott’s fellowship involves horticulture and the RBGE’s living collection, but obviously he sees his work as tied to and enriched by the herbarium’s resources, including its long history.

There are unusual collections of plants that can give insights into social history.  I’ll present two exampled here that tell a lot about 19th-century attitudes toward plants.  The first are Biblical herbaria.  There is a video produced by the University of Leeds on this Victorian genre.  These collections were marketed as portable kits that could be used for inspirational lectures, Bible study groups, and Sunday school.  It was also common for travelers to the Holy Land to return with albums of plants, and publishers came up with the idea of marketing what were essentially exsiccatae of these plants, including descriptions of the species and citations on where they were mentioned in the Bible (Greene, 1895).

There were also many 19th century exsiccatae of grasses, some focused on their horticultural uses and others on agriculture.  Three examples from Britain are very different from each other.  M. Sutton’s Analyses of Natural Grasses is a beautiful wooden case with tiny boxes of seeds below a striking display of grass inflorescences, a rich landowners way of displaying agricultural expertise.  David Moore, director of what is now the National Botanic Garden in Ireland, produced a more traditional exsiccatae of the indigenous grasses of Ireland in 1843.  John Percival’s collection, though limited to wheats, is the most impressive:  80 boxes with specimens collected around the world, along with notes including archaeological details.  This complete collection is at the University of Reading’s herbarium.  And it seems a fitting way to end this ramble among specimens.