The first documented herbarium or hortus siccus, dry garden, was created in Italy during the Renaissance, one manifestation of a renewed interest in nature. It was made by Luca Ghini, who founded the first botanical garden in 1543 in Pisa and another in Padua two years later; both were associated with universities and were used in teaching as were herbaria. By 1551, Ghini’s herbarium had grown to 300 sheets, but none survive. However, his students, Andrea Cesalpino and Ulisse Aldrovandi, created even larger herbaria, and some of these specimens are intact. 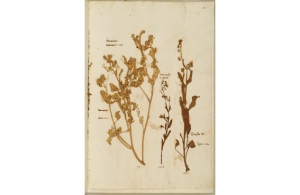 It is perhaps not coincidental that around the time the first botanic gardens and herbaria appeared, the first printed herbals with accurate illustrations were published. The accompanying texts were based on ancient learning. It took almost a century for a vocabulary and way of precisely describing plants to emerge, and until that happened, the most accurate information about plants was visual: good illustrations, living plants, and herbarium specimens. With these three tools, botanists could finally make headway in studying plants and the relationships among them, not just as sources of medicine.

One impetus for the development of botany, and of herbaria, was the number of new plant species coming into Europe during the age of exploration. It was nearly impossible to keep plants alive on long sea voyages, so seeds and dried specimens were often Europeans’ first introduction to many species.  While governments financed expeditions, many specimens ended up in private hands and collections frequently began as the work of a single individual.  As well as being a medical resource, the herbarium was such a rich man’s way of displaying wealth. The British physician, botanist, and collector, Hans Sloane, created what was one of the largest herbaria of the pre-Linnaean era. Most of it has remained intact in 265 volumes and was part of the collection that served as the foundation for the British Museum. Later, the French banker Benjamin Delessert amassed an impressive collection which helped to make the Geneva Herbarium one of the finest.

Chaptalia nutans from the Sloane Herbarium at the Natural History Museum, London

By the mid-19th century, botany was a popular pastime both among the wealthy as well as the laboring classes, who met during their free time on Sundays to discuss plants and trade specimens. Many amateurs, both rich and poor, made important contributions, not only in preserving specimens in their collections, but also in identifying new species, and even writing significant botanical publications. Because of their means, the contributions of the wealthy are often more obvious. Just as Sloane’s and Delessert’s names are linked with important herbaria, so are other wealthy enthusiasts. Henry Borron Fielding, heir to a British millinery fortune, left his large collection to Oxford University, where botanists are still discovering type specimens in this vast horde. Another wealthy British collector, Philip Barker Webb, willed his massive collection of over 300,000 specimens to the University of Florence, instantly converting its herbarium from a small institution to a significant one.

The dominance of European botanists and herbaria continued into the 19th century, though by mid-century, botanists in the East and Midwest were also amassing large collections resulting in tensions with field collectors. The botanist Asa Gray and others in the United States maintained large collecting networks and were frustrated when their minions refused to be as meticulous or energetic as they wished. Also, specimens are a form of intellectual capital, and some field collectors wanted to retain more of that capital for themselves. For example, George Engelmann in St. Louis and Ferdinand von Mueller in Melbourne, Australia didn’t want to just turn over specimens to distant experts but to study and name plants themselves. 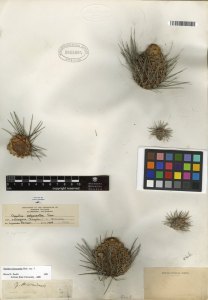