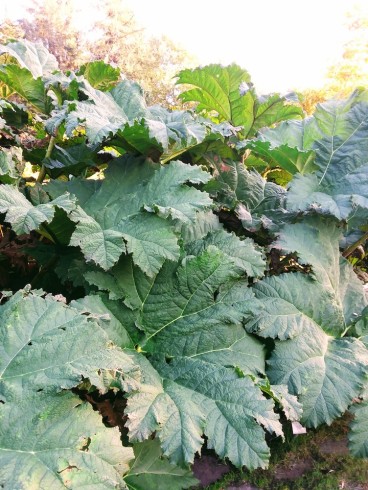 In this series of posts, I’m discussing books I read during my trip to northern states visiting relatives.  On the way I stopped in Philadelphia (see last post) and went to the Joseph Fox Bookshop, one of my favorites.  I always find surprising and interesting books there.  One of the discoveries on this trip was Atlas of Poetic Botany by Francis Hallé (2018), professor emeritus of botany at the University of Montpellier in France.  He is noted for his research on tropical plants, particularly trees.  He coauthored a book on the architecture of trees in the tropics (1978), and he envisioned studies in the forest canopy.  His first idea was to use a dirigible to move through the upper reaches of trees, but winds made this impractical.  Then he worked with a group of engineers and botanists to create a raft suspended from a dirigible.  Others produced alternative designs with systems of pulleys and cranes.  These technologies made it possible for biologists to finally spend more time in the upper reaches of tall tropical trees, studying the animals and plants living there and the intricate relationships among them.

Hallé is now 80 years old, but he is still passionate about tropical plants, as his Atlas reveals.  This is a book aimed at the general reader and its illustrations, drawn by the author, are as fascinating as the text.  In his introduction, he makes a strong case for the continuing need for botanists to draw despite access to photography that can record a plant’s form and color in a second.  For Hallé, the advantage of drawing is what others would see as its disadvantage—it takes time:  “To seize an ephemeral moment, as photography does, is to content oneself with limited information.  The extended time required for drawing, on the other hand, amounts to a dialogue with the plant” (p. 8).  That’s a lovely phrase, “a dialogue with the plant,” and isn’t that what botanical research is about?  Hallé also points out that this process involves the relationship not only between plant and observer, but between the observer’s hand and brain.  He then adds that botanical drawings give rise to emotions, luring the observer into further investigation of the subject.

A first glance at Hallé’s drawings might be disappointing to those accustomed to standard botanical illustrations.  His might be considered naïve but that’s their charm:  they are meant to teach, to be understandable to nonbotanists.  Hallé’s chief tool is a pencil and not a very sharp one at that.  Once he has the basic drawing down, he goes over the pencil lines with pen and ink, sometimes adding color.  He might introduce a figure into the drawing, a human or an animal, to give a sense of scale.  He does follow a few botanical illustration conventions such as adding enlargements of flowers or other pertinent structures.  Some drawings are very diagrammatic, but almost all have a slight sense of whimsy.  At times Hallé plays with scale as when he emphasizes the gigantic size of Gunnera peltata by adding a small artist drawing the plant, one who is in reality squirrel-sized in relation to the leaves (see photo).  There are a couple of videos on the web that illustrate his technique.  One was done in conjunction with an exhibit at the Montreal Botanical Garden of poster-sized enlargements of his work scattered through the garden.  The other was in a series made along with a documentary on conserving tropical rainforests.  This was a collaboration between Hallé and the filmmaker Luc Jacquet who created another documentary, March of the Penguins.

In the videos and the book, Hallé’s passion for tropical botany is evident.  He is fascinated not just by the trees, but by all the life connected to them.  He is intrigued by plants that have developed what might be considered odd adaptations to survive in unusual environments.  He notes that the flowers of the Amazonian tree Duguetia calycina are not to be found in its canopy.  Instead, its lower branches hang down to the ground, grow underground to some distance from the trunk, and then produce flowers with a pleasant fragrance.  They are probably pollinated by flying insects, but little is known about the tree or its relationships.  Hallé adds that a totally different species from another family and growing in Cameroon, Caloncoba flagelliflora, has a similar habit, producing tiny white flowers on the forest floor.  Another of my favorites is a parasitic laurel, Cassytha filiformis.  A tropical vine, it looks like a typical laurel when young, but once it finds a plant to crawl on, most of its chlorophyll disappears, and it fades to a yellow color after it punctures the host’s bark to extract nutrients.  This vine can engulf a tree to the point that, as Hallé writes, huge mango trees in Thailand were “covered by a Cassytha; they looked like they were wearing giant yellow wigs” (p. 60).

I hope I’ve given some sense of how “poetic” in a visual as well as verbal sense this book is.  It introduced me to an author and to plants that are equally intriguing.  And it reminded me once again of how important art is to botanical science.  If you want to learn more about Hallé’s approach, there is a booklet online that describes a workshop he gave, along with Peter Del Tredeci, on tree architecture to students in the University of Virginia’s Landscape Architecture program.