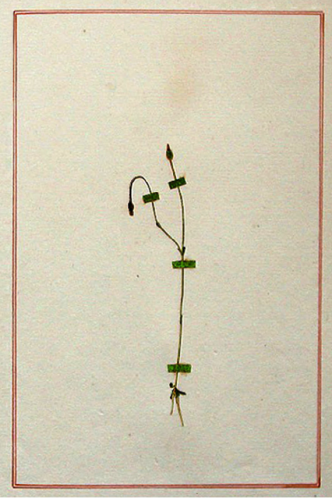 The argument I am making in this series of posts (1,2,3) is that in the 18th century there was an interest in natural history, and particularly in plants, that was both intense and pervasive among European educated classes.  Statesmen like the British Prime Minister, Lord Bute, merchants such as George Clifford, and noblewomen including the Duchess of Portland were fascinated by, if not obsessed with, the plant world.  This extended well beyond enjoying gardens or just decorating with plants; they studied botany, learning as much as they could about plant taxonomy with the help of the Linnaean method.  They went so far as to dissect flowers, coax exotic species into bloom, attempt hybridization experiments, and of course, keep herbaria.  With this cultural background, it is hardly surprising that two of the most influential writers of the day were also fired with botanical zeal:  Jean-Jacques Rousseau and Johann Wolfgang von Goethe.

Rousseau became serious about botany around 1764 while he was living in Switzerland (Cook, 2012).  This fit with his philosophy of humans being linked to nature.  Like many of that era, as soon as he became interested, he had a thirst to learn more and more about plants, including how to identify them.  Rousseau was not particularly taken with the Linnaean system, though he studied it.  He was instructed in it by two Swiss physicians as mentors who went on plant collecting tours with him and taught him to press plants for a herbarium.  Rousseau really took to the practice and created beautiful specimens mounted on pages framed in red ink (see figure above).  He also corresponded with the botanist, Joseph Dombey, who sent him over 1500 rare specimens to study.  Rousseau was fascinated by plant form, by the visible similarities and differences among species.  He saw botany as a way to calm the emotions by focusing the mind on something outside itself.

Rousseau was closely tied to the intelligentsia of the day and corresponded with a number of well-educated women of the elite.  He visited the Duchess of Portland (see earlier post) when he went to Britain in 1767 and botanized with her.  He had already been in correspondence with her and sent her two small herbaria.  He also was in contact with Madeleine Delessert, the wife of a financier.  She prevailed on him to give her instruction on how to teach her daughter about plants.  This was the origin of his book of eight letters on botany.  It is a lovely little work, especially because the final chapter is on how to create a herbarium—what more could you ask for in botanical instruction?  In 1785, the British botanist Thomas Martyn translated the letters into English, but gave them a more Linnaean slant than Rousseau had.  In the early 19th century, the letters were published with illustrations by none other than the great botanical artist Pierre-Joseph Redouté, a beautiful tribute to the philosopher (Rousseau, 1979).

One of those influenced by Rousseau’s botanical work was Johann Wolfgang von Goethe.  He became interested in plants when he was made an administrator in Weimar and had to deal with agricultural and forestry management.  As with so many others, he then grew fascinated by plants for their own sake.  He read Linnaeus’s books as well as Rousseau’s botanical writings and tried to work out the similarities and differences among species.  Goethe started a herbarium and also began sketching plants and plant structures (Schulze, 2006).  The turning point in his interest came when he traveled south to Italy and was struck by all the new and intriguing plants he encountered.  They had some similarities with those in Germany, but there were also tremendous differences, especially in the greater variety of species, the number of variations on botanical forms.

As he tried to make sense of this multiplicity, Goethe had a flash of insight when he visited the botanical garden in Padua.  There he saw a palm tree and studied the variations in the forms of its leaves.  He became fixated on leaves and the idea came to him that all plant structures on a stem: leaves, flowers, and the parts of flowers were variations on a basic leaf form.  He came to realize that it was impossible to visualize this Urblatt, as he called it, or to draw it; it was an ideal, a mental construct.  This was also the case with what he termed the Urpflanze or basic plant from which derived all the different plant forms.  He was not thinking in evolutionary terms but more Platonically of an ideal form.  Goethe developed his concept in a book on plant metamorphosis.  While some consider it of little importance in the development of modern botany, others see it as seminal in that he examined questions of relationships among forms that are still relevant today.  One in the second group was Agnes Arber, a noted plant morphologist of the first half of the 20th century who published an English translation of Metamorphosis (Arber, 1946) and wrote The Natural Philosophy of Plant Form (1950) that built on Goethe’s ideas.  Arber saw the basic plant unit as the leaf-as-partial-shoot, and her work received some vindication at the end of the 20th century when the genes responsible for flower structures were discovered and the ABC model of flower development form was published (Haughn & Somerville, 1988).  To me, this is a wonderful story of how fundamental ideas can resurface in new ways as science develops.  It’s another example of where the passion for plants can lead.

I once did a presentation on “Guess Who Had a Herbarium?”  This was in the early days of my herbarium infatuation, and I was fascinated by the number of non-biologists who collected plant specimens.  Jean-Jacques Rousseau not only was very interested in plants, but also tutored others in how to create their own plant collections.  Paul Klee kept an herbarium, though it was not very botanically correct:  the plants were pasted onto black paper and were unlabeled.  As a teenager, Emily Dickinson wrote to a friend and asked if she were collecting plants because “everyone is doing it.”  Johann Wolfgang von Goethe had a collection, which isn’t so surprising because he wrote about plant morphology, and it is seems only fitting that Henry David Thoreau collected plants.  Two of his specimens were found a few years ago at the University of Connecticut’s George Stafford Torrey Herbarium stored unnoticed among their several hundred thousand specimens until the collection was digitized.

Since that original presentation, I’ve come across several more collectors, including John Stuart Mill, who had a herbarium of thousands of plants, and John Cage who collected mushrooms and even taught a mycology course at the New School.