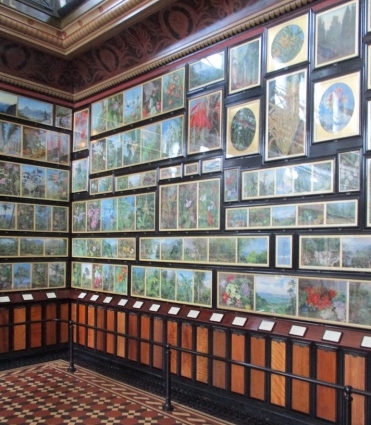 When I began to take this blog seriously, I wrote a series of posts on art and herbaria.  The first in that series was on Victoria Crowe, who has long lived in Scotland and is renowned there.  When she was commissioned to paint a portrait of David Ingram, then Master of St. Catherine’s College at Cambridge University, she wanted to include images from his work as a plant pathologist.  This sparked conversations between them about herbaria.  Crowe became interested (of course!) and ended up spending time in the herbarium and library at Cambridge University.  Ultimately this led to an exhibition called Plant Memory, for which Ingram contributed to the catalogue (Crowe & Ingram, 2007).  Included was a delicate watercolor of a herbarium specimen, even showing how it was taped to the page.  They also published an article (Crowe and Ingram, 2007) based on a lecture they gave, in which Crowe described being struck by the “tension between timelessness and fragility” in specimens.  This phrase has stuck with me as being a very artistic and also philosophic way of thinking about them.

In writing about Crowe, I wanted to include an image of her work in my blog, but hesitated contacting an artist of her stature.  Finally, I did it, and she very graciously sent me not one, but several images, and also some publications on her work.  Needless to say, I was thrilled.  But it got even better because she passed my email address on to David Ingram, and we began writing to each other.  Ingram was not only at Cambridge, but had also spent several years as director of the Royal Botanic Garden, Edinburgh.  In retirement, he has written widely on art and botany, including work on John Ruskin (2011), the textile artist and entrepreneur Annie Garnett (Ingram & Roberts 2017), and the French glass artist Emile Gallé (Coutts & Ingram, 2012).  When I was in Edinburgh, I had the opportunity to have conversations with both Ingram and Crowe.  These experiences were memorable.   I will write in more detail later, but here I just want to say that I found it very encouraging that people of this stature are convinced of the profound relationship that exists between art and science, and they both speak from much experience.  For many years, Crowe taught classes, including botanical art, at the Edinburgh College of Art.  In addition, she has painted many portraits including those of such scientific luminaries as the physicist Peter Higgs and the astronomer Jocelyn Bell Burnell.  Ingram’s interest in art and botany is related to his years of research on plant pathogens when he translated his observations under the microscope into drawings as part of his practice.

When I went to London, I met another one of my email friends, Laurence Hill, a photographer who specializes in the genus Fritillaria, though this description fails to get at the heart of what Hill does.  On his website, Fritillaria Icones, he documents each species in the genus, recording the entire plant in bloom, including bulb and roots, as well as the structure of the flowers and seeds.  All these images and related data are available on the website under a Creative Commons 4.0 license.  He has also created large-scale works that have been exhibited at the Shirley Sherwood Gallery at Kew Botanic Garden and won prizes in Royal Horticultural Society photographic competitions.  I was thrilled to finally meet Hill and see some of his work in its true dimensions rather than on a computer screen.  I’ll go into more detail in the future, but I do want to say that what is most impressive about Hill’s photographs is the meticulous work that goes into them.  Each is the result of digitally stitching and stacking together many images to make a whole that has great clarity even at high magnification.  The only problem is that his website is addictive and hard to leave because there’s so much to explore.

Besides these three great conversations, I also saw a lot of other impressive art, botanically related of course.  At the Royal Botanical Gardens, Kew alone, there was the Marianne North Gallery with hundreds of oils done by this 19th-century botanical explorer (see photo above), and close-by the Shirley Sherwood Gallery with two botanical art exhibits, one on the history of the recently renovated Temperate Glass House and the other on Australian botanical art.  In the Kew Gardens Gallery, I was delighted to find dozens of leaves from the diaries of the 19th-century orchid specialist John Day that are filled with his watercolors as well as his notes.  I have a book on these (Cribb & Tibbs, 2004), but seeing them in person was exciting.  Also exciting was finding at the Royal Botanic Garden Edinburgh a copy of the huge triptych of the titan arum Amorphophallus titanum painted by Isik Güner, Jacqui Pestell, and Sharon Tingey when it was blooming at the garden.

Selection of wax models if lemons from the George Loudon Collection in the Surreal Science exhibition at the Whitechapel Gallery, London.

In London, I went to two notable exhibits that were botanically related.  One was Fashioned from Nature at the Victoria & Albert Museum and dealt with a multitude of aspects of how animals and plants are used in clothing.  It was very cleverly done, with not only obvious things like feathered hats, but also new technologies that produce leather-like material from fungi and cloth from microbes.  On my last day, I went to the Whitechapel Gallery to see Science Surreal, an exhibit of portions of George Loudon’s natural history materials that he has amassed from the discards of old collections.  In this case, they were paired with ceramics in a surrealistic display by Salvatore Arancio.  My favorites were the fungi models made from velvet (see photo above) and Italian wax representations of oddly shaped lemons.  If you would like to see these and other marvels, Loudon (2015) has written a book on his collection.

Note:  There is no way I can thank Victoria Crowe, David Ingram, and Laurence Hill for their willingness to share their time and ideas with me.  My visits with them were my most meaningful experiences in Britain.

At the moment, I’m reading a book called Of Microscopes and Monsters by Martyn Kelly, who also has a blog with the same name.  It’s about his work as an environmental consultant in Britain. Kelly focuses on algae, and particularly on diatoms as indicators of freshwater quality.  This book, which is self-published, is freely available on Kelly’s website.  I’ve downloaded it and printed it out primarily because it is full of images, many of them watercolor illustrations of algae done by Kelly himself–he also has training in art.

By the quality of the layout and of the content, I would assume that Kelly tried to find a publisher.  On the one hand, I am sorry he didn’t because his book deserves a broader audience since he does a wonderful job of explaining not only why algae are so crucial in understanding water pollution, but also how many variables are involved in trying to measure water quality.  This book is aimed at the general reader and is crystal clear, yet doesn’t shun the complexities of the issues involved.

Having said all this, I am obviously glad that Kelly was generous enough to offer a free download.  This is the kind of intellectual generosity for which I have great respect–and gratitude.  Another person of the same ilk is Laurence Hill, who has done an amazing job of documenting all species of the flowering plant genus Fritillaria.  He uses digital photography and has spent years growing the species and then photographing the entire plant (roots included) as well as plant parts such as the capsules, seeds, bulbs, and flowers.  He has then taken the individual parts and arranged them so their varied sizes and forms can be compared across species.  He has done the same for the plants as a whole:  a lineup according to their evolutionary relationships, based not only on morphological data but DNA sequence information as well.  The resulting composite image is available in a downloadable booklet on Hill’s Icones Fritillaria website.   Facts sheets and images of the various species as well as comparison sheets of pods, etc. are also downloadable–the entire site is open source–definitely a model for plant information sites and visually beautiful as well.  As a final note, the booklet is related to a display of a large copy of the composite image that was on display at the Shirley Sherwood Gallery at the Royal Botanic Gardens, Kew.  It took up an entire wall, and was obviously the best way to appreciate the extent of Hill’s accomplishment.

A final example of generosity on the web is not quite as spectacular as the first two, but it’s still very helpful.  Timber Press’s Bringing Nature Home by Douglas W. Tallamy makes the argument that filling a garden with native plants helps to restore habitats because the plants then attract and support animal species native to the area, especially insects.  Some of these, in turn, assist in keeping invasive insect species under control.  Timber Press obviously wants the book to sell and sees tantalizing the reader as a marketing approach so it has made two chapters freely available on the web.  Not only is the text readable and informative, but the photographs are very pleasing to the eye.