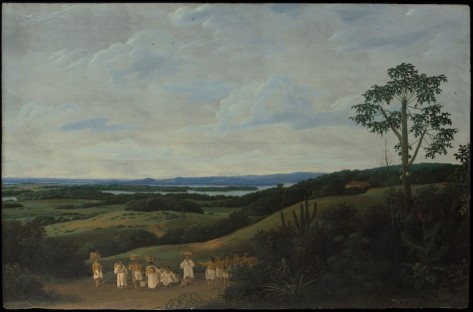 Nearly 40 years ago, when I started dating my husband, we would go to the Metropolitan Museum of Art because of his interest in art history.  I was not as enthralled with the Impressionists and even less with genre painting—his two loves—so I searched for something I could get excited about.  That’s how I began to look for biology in art, and I’ve never stopped.  I can remember on one visit discovering a painting by Frans Post, a Dutch artist who had traveled to Brazil in the 17th century and recorded the landscapes and people he encountered.  I vividly recall walking into a gallery, seeing his “A Brazilian Landscape,” (see figure above) and focusing on the rich vegetation it pictured.  Here was someone who knew how to paint plants; here was a painting that, as far as I was concerned, was a work of science as well as art.  At the time, it didn’t occur to me to question how a Dutch artist ended up in Brazil, because obviously Post must have visited the country; the painting was definitely an eye-witness depiction.  In the years since, I’ve encountered Post’s work, particularly his Brazilian paintings, now and again, so I’ve come to know a little more about his story.

In her book on expeditions to Latin America up to the time of Charles Darwin, Daniela Bleichmar (2017) describes the survey of parts of Brazil by Count Johan Maurits van Nassau-Seigen (1604-1679).  The Netherlands formed the Dutch West India Company in 1621 and took over the northeast coast of Brazil from the Portuguese in 1624, remaining in control until 1654.  Their colony was called New Holland or Dutch Brazil, and Maurits was governor there from 1637 to 1644.  He set out to study the area and to do this he employed two artists, Albert Eckhout and Frans Post.  He also brought with him, at his own expense, a German naturalist, Georg Marcgraf and a Dutch physician, Wilhelm Piso.  They directed collection of specimens and objects of interest, all of which were shipped back to Europe.  Thus Maurits and his collaborators made the first systematic study of New World natural history (Appleby, 2013).  It is said that it was the Maurits model that Mark Catesby used when he took his second trip to North America which resulted in his Natural History of Carolina, Florida and the Bahama Islands.

The fruits of Maurits’s expedition are many.  There are, of course, Frans Post’s landscapes, which as I have noted are also plant scapes, picturing breadfruit trees, pineapples, cycads, cacti, and other Brazilian botanical wonders, along with indigenous peoples going about their lives.  The other artist, Albert Eckhout, painted from a closer perspective, doing portraits of individual indigenes and still lifes of local plants with an emphasis on fruits.  These are reminiscent of Dutch still lifes of flowers, but more somber and definitely designed to give as much information as possible about the subjects.  Many of the fruits are shown both whole and cut in half to reveal the seed arrangement.  One painting focuses on a large palm inflorescence paired with a basket of peanuts, chili peppers, and spices.  Another depicts a pineapple, melons, and cashews, with a passion flower vine twisting among them, a fully opened flower in the foreground (see figure below).  These would not be considered botanical illustrations in the strict sense of the term, in part because there are just too many species crowded together.  On the other hand, they are detailed and realistic; the species are in most cases easily identifiable, so they are definitely informative botanical documents as well as notable works of art.  The philosopher David Topper (1996) writes about just such art arguing that the line between artistic work and empirical scientific document is often impossible to draw.  Art and science in cases like this cannot be pulled asunder. 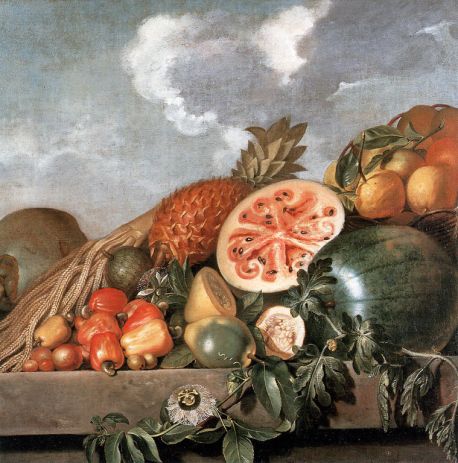 Albert Eckhout’s “Still Life with Watermelons, Pineapple and Other Fruit” (1640) in the National Museum of Denmark.

As to the textual outcome of the expedition, the naturalist Georg Marcgraf died right before the expedition returned to Europe, so the publication work was undertaken by the physician Wilhelm Piso.  He published Historia Naturalis Brasiliae in 1648.  As Bleichmar notes, this was the first major illustrated natural history of any region of the Americas where the text and the illustrations were the result of first-hand experience by naturalists and artists.  It opens with Piso’s observations of medical and botanical observations.  This is followed by Marcgraf’s contribution on plants and animals.  In all cases, Piso gave Portuguese, Spanish, and indigenous names for each species.  There is a volume of Marcgraf’s herbarium at the University of Copenhagen’s herbarium.  It contains what are probably the first dried plant specimens from the tropical New World, and includes 177 species (Ossenbach, 2017).  One of the orchids is Trigonidium acuminatum.  There is an image of the same species in the Historia that is almost identical in its features (see figures below).

While Maurits’s name is associated with this expedition, he was more the organizer than an active participant.  He was essentially a military man who had earlier been involved in the campaign against the Portuguese that led to the Dutch control of northeast Brazil.  His job was to run the colony’s government, but he valued knowledge of its natural history enough to not only fund but manage the survey.  He obviously selected his team well since they produced a great deal of visual and textual information in a timely fashion compared, for example, to the results of Francisco Hernández’s work in the 1570s that remained unpublished well into the next century (see first post in this series).  What I hope should be apparent from this series of posts (1,2,3) and the previous one (1,2,3,4), is that there were many different approaches to exploring the plants of unknown lands in the early modern period.  These differences involved personalities, politics, culture, and geography.  That variety is what makes the history of botany so fascinating.

Topper, D. (1996). Towards an Epistemology of Scientific Illustration. In B. S. Baigrie (Ed.), Picturing Knowledge: Historical and Philosophical Problems Concerning the Use of Art in Science (pp. 215–249). Toronto, Canada: University of Toronto Press.